Whereas, on this day, individual residents, landowners, business owners and taxpayers of the area come together to form our unincorporated community  Downtown Texas, Texas, in Milam County.

Whereas, an unincorporated community is one general term for a geographic area having a common social identity without benefit of municipal organization or official political designation (i.e. incorporation as a city or town).

Whereas, the action taken today provides our community identity which will be depicted on available mapping and almanacs, etc., better enabling our economic development committee to attract other businesses, tourist and residents.  Our proximity to the El Camino Real De Los Tejas, which is a National Historic Trail, and the three 17th century Spanish Mission sites and Presidio, are showing to be additional assets attracting tourism to not only our State, county and cities, but as well to our community, Downtown Texas, Texas.

Therefore, be it resolved, and let it be known, that on April 24, 2009, the unincorporated community Downtown Texas, Texas, in the State of Texas, in Milam County has been established by this proclamation. ​

From 1746 – 1749  three Spanish missions and a presidio were built here along the San Gabriel river by Spanish Missionaries, Mission Indians and a Garrison of Spanish soldiers.  They also were constructing a rock dam on the river and a system of acequias (canals) just east of Apache Pass to irrigate the Mission crop fields ¼ mile southeast of here.  The bulk of the stones from the dam and Missions were used in the construction of the San Gabriel Texas School in 1935 which is approximately three miles West of Apache Pass.

Three granite markers, referencing the missions were erected here in 1936 by the State of Texas.  This San Xavier Mission Complex Archeological District is in the National Register of Historic Places.       Note: The San Xavier River was later renamed the San Gabriel River

In 2005 the Upper El Camino Real de los Tejas was identified and passes here, along the Mission sites and Apache Pass.  It was a trade route between Mexico and Louisiana prior to and after 1746 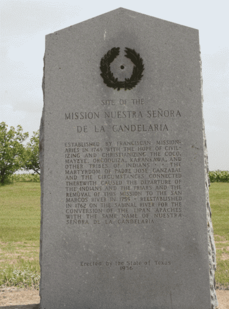 From 1746 - 1749 three Spanish missions and a presidio were built in the area by Spanish missionaries, mission Indians and a Garrison of Spanish soldiers. The Spaniards goals were to Christianize and civilize the numerous Indian tribes in the area and to establish a presence, in this region, ahead of the French.

They also were constructing a rock dam and a system of acequias (canals) just east of Apache Pass to irrigate the mission fields ¼ mile southeast of here.  The stones are said to have been used in the construction of the San Gabriel School in 1935.

Apache Pass, named by the early Spanish Explorers, is the gravel bar crossing here on the San Gabriel River that was used for centuries by Native American Indians then by explorers, settlers, and local farmers and ranchers for many reasons.  A short distance north of the crossing there are tracks remaining in the native pasture identifying the old trail.

This crossing, that is still used by farmers today, was the crossing used prior to the existing iron bridge which was built in 1912.  Prior to this date, the path took a NNE route out of the river bottom to higher ground where numerous huts and later houses were built.  Presently, County Road 428 heads north from the bridge to where, in 1925, the Worley Cotton Gin and its trade store were built.  The store remains standing today.  Photo below depicts a granite marker erected in 1936 by the State of Texas telling of the Spanish Missions in the area.

The property was purchased by the Worley family in the late 1800s and remains in the family.

In 2004, FM 908 was identified as part of the Upper El Camino Real, a National  Historical Trail from Mexico to Louisiana.

The “Apache Pass” Group is very aware of what the American Indians did for America. They were here centuries before the “white man”.  We keep this in mind and humble ourselves here on their homeland.

We look back and understand and feel for their plight.  America did move on, but not without sacrifice by all. We recognize that we all had a part and all are to be commended.

​​About Us / History Page